In the past, they safeguarded the old ways and bequeathed some of the most treasured images of the industry in its most basic form. Today, the connection is maintained through a successful business which creates Harris Tweed products and markets them around the world.

One of 12 children, Marion Campbell was born in 1909 – the same year the Orb trade mark was first registered -  and passed away in 1996. She lived her entire life in Plocropol and grew up in a community where the men fished for herring and the women became weavers, among many other skills and chores. 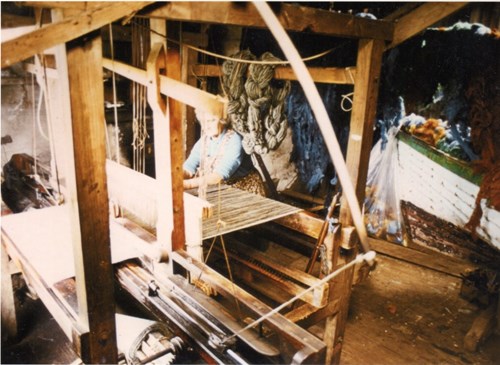 For more than 60 years, Marion made Harris Tweed in the same way she learned from her mother and sister while still a young girl.  It was entirely a home industry, every stage of the process carried out around her own house and loomshed.

Over the decades, Marion’s fame spread far and wide. A gifted designer as well as producer of the fabric, she became the subject of regular media interest through the 1960s and ‘70s as appreciation grew of the painstaking work and ancient skills that created her fine Harris Tweed.

Catherine Campbell was raised on the croft next door to her aunt Marion’s in Plocropol.  “We were always around the dye-pot, spinning wheel, her loom and everything she did,” Catherine recalls.  “As children, we were intrigued by the colours that were created from the flowers and the lichen.  Even for the adults, it was pretty incredible”. 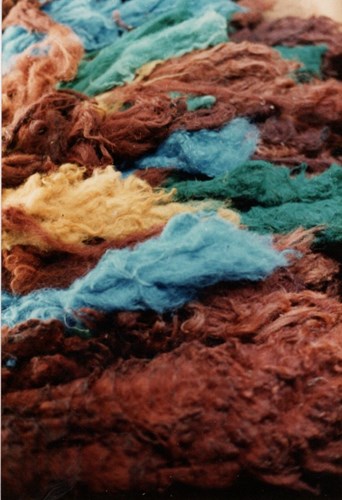 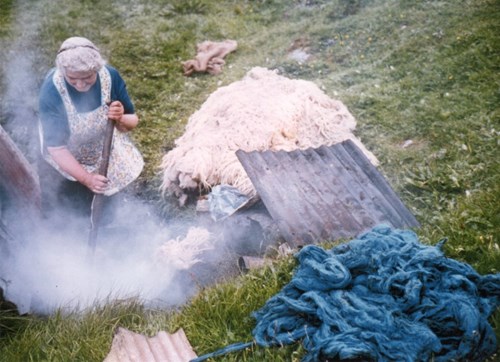 There were no fancy implements involved in making the tweed with the exception of the wooden handloom which Marion used all her working life. A soup spoon was used to scrape the lichen or crotal off the rocks. The beart dheilbh – the wooden frame for warping thread – was built by her brother and an old door served its purpose for waulking the cloth. 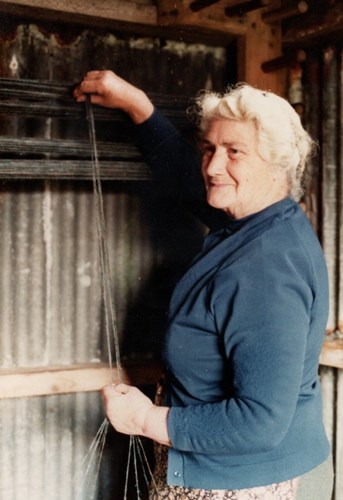 Catherine recalls: “Because the work was always around the home, we grew up with Harris Tweed. It was such a hard process in those days; it took so long to prepare the wool before she could begin the weaving.

“As we were playing around the croft we would hear the melodious beat of the tweed on the waulking board echoing in the bay. We knew what it was and it filled the air with a sense of importance, like the beat of a drum, knowing the tweed was finally being finished.

“Always smiling, always happy, diligently and faithfully working … with very little in those days”, as Catherine remembers her, Marion was awarded the British Empire Medal in 1985 for services to Harris Tweed. She continued to weave into her early 80s and imparted to countless visitors from around the world the extraordinary secrets of her dye-pot.

By the 1970s, Catherine’s father had exchanged the fishing boat for the Hattersley loom,  weaving at first for the Stornoway mills. On one occasion, he made a mistake in a design for a commission. In these days, weavers were either fined for the cost of the lost tweed or they could purchase it.  Alasdair bought the tweed and sent it off to mainland dealers – who liked it and wanted to order so much he opted thereafter to become an independent weaver designing his own tweeds. 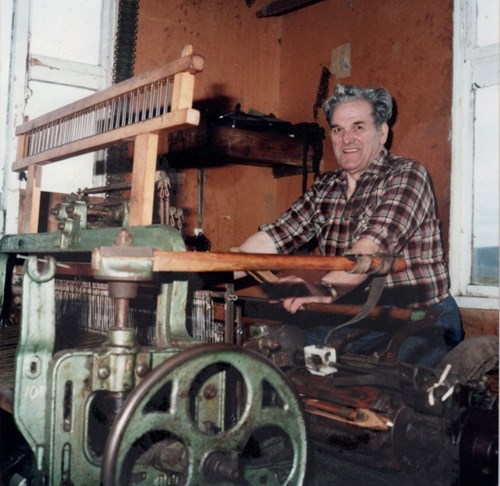 He opened a small shop, as used to be very common among the enterprising Hearachs, and ran it with his wife Katie. The tourist buses would follow the rocky road to Plocropol, first to visit Marion on her handloom – who was completely swamped by demand – and then follow-on next door to see Alasdair on his Hattersley loom.

As a young woman, Catherine became increasingly interested in the gap between making the tweed and its end use in the fashion houses of the world.  “It was like two different languages and they seemed so far apart.”  She remembers buyers from mainland companies coming to the shop in Plocropol dressed for the expedition with beautiful Harris Tweed clothes and accessories. It set her wondering why more of that value could not be retained in the islands.

It became Catherine’s ambition to bring the two languages closer together and in 2005, this started to become a reality.  She went into business as a retailer of Harris Tweed fabric and products firstly in Plocropol alongside her mother Katie and later taking over the old Co-op shop in Tarbert, Harris.  Since then, the business has grown spectacularly, driven by Catherine’s creativity and acumen. 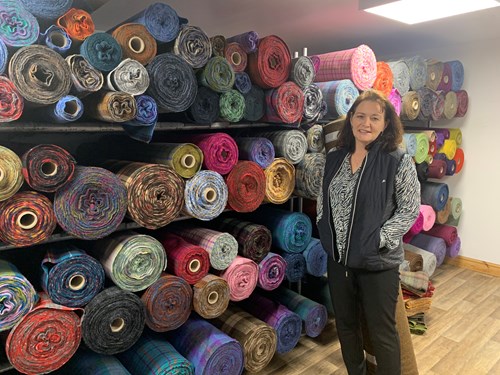 She transformed the old school building in Drinishader into a centre which tells the story of her family’s involvement in Harris Tweed.  This was the school where generations of Campbell children studied and visitors now enjoy seeing Marion’s loom and artefacts while the Harris Tweed Exhibition is housed in a smart new building next door.

There is also now a shop in Inverness run by Catherine’s niece, Annabel Campbell, while the Tarbert business  expanded with the opening of a much larger shop selling a vast array of Harris Tweed products. Many of the smaller ones, like scarves and cushions, are made locally.  The catalogue runs to 2300 items including hundreds of beautiful Harris Tweed designs.

The Tarbert shop – next door to the more recent Isle of Harris Distillery -  caters for the shoals of visitors who, in a normal year, pour off the ferry from Skye.  Many become regular customers and particularly in current circumstances, the huge world-wide mailing list Catherine has built up is a source of strength for her on-line business, which is currently keeping eleven people busy in Tarbert, as well as the shop staff.

The Harris tradition of entrepreneurship is being well maintained and the Campbells of Plocropol – with Catherine’s two sons and daughter working in the business  -  are guaranteed to carry a Harris Tweed  dynasty into yet another generation. “Sales are important,” she says, “but the main interest …. it’s the love of working in an Industry which holds such fond memories and inspiration for me ”.

Either way, it is a great success story, respected and valued by all at Harris Tweed Hebrides.