For the past 35 years, Murdo’s superb, sensitive photography has graced the pages of the Guardian and the Observer. He has been UK Press Photographer of the Year and his work has featured in the most prestigious of galleries and exhibitions.

His first photographs were taken in his father’s loom-shed at 9 South Shawbost and Murdo says: “There hasn’t been a point in my life when Harris Tweed was not involved”.  His connections to the industry remain deeply personal. 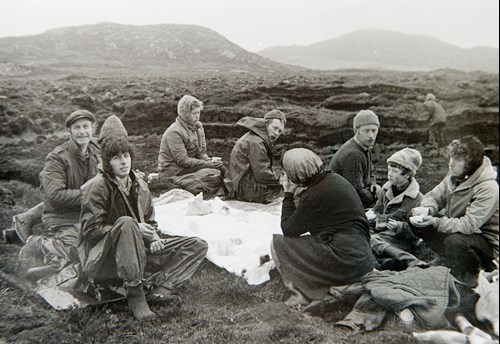 (A family shot at the peats taken by Murdo when he was 15.  “Everyone in it was, or became, involved one way or another in Harris Tweed”.)

“One of my first memories is sitting on the seat at the loom with my father, or on the pile of waste wool. The loom shed was like another room in the house and we probably spent more time in it than in the sitting-room.

“I associate all that with the closeness I remember existing in our community and in our family. Beaming a tweed was as intimate an experience as family worship.

“My grandmother lived across the road and there were three loom  sheds around her house. So from my earliest memories there were four looms going  - a cacophony of constant activity, accompanied by the smells, the language and vocabulary of Harris Tweed – beart, bobain, snàth, fuigheagan….”.

When Murdo was 13, this happy existence was blown apart when his father, Coinneach, suffered a stroke.  Murdo’s mother, Ishbel, was required to raise the family of five on benefits and her own labour.  Within five years, Coinneach died.

Earlier in her life, Ishbel worked in the Stornoway mills and trained as a darner – a term which might belie the intricacy of the work, correcting every minute mistake in the pattern of the tweed or the finished cloth. 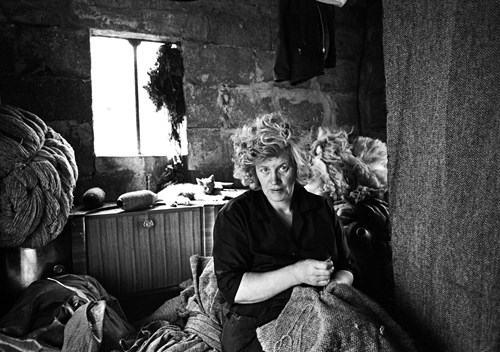 Ishbel recalled*: “Smith’s Mill was owned by a family from Peterhead.  I’m sure they came to Stornoway at the time of the herring as fish-curers. There were also a few women from Peterhead who came originally as gutters. Once the herring finished they went to Smiths. It was one of them who taught me the trade. Her name was Barbara Haskie and I sometimes think I can hear her yet, ‘under two, over two, under two, over two”.

With her husband no longer able to weave, Ishbel reverted to her old skills, taking in tweeds to her home from Shawbost Mill to be darned at all hours of day and night. Murdo says: “My mother compensated for the fact that we had no income other than state benefits. The tweeds moved out of the shed and into the house. There was tweed everywhere”.

The loom was silent for two years before Murdo’s elder brother, Kenny, started weaving while still at school. By then, Murdo was at college, his  own interests having developed in a different direction. The five children did a paper-round in Shawbost and Murdo’s share of the proceeds went into photography and the mysteries of developing film. 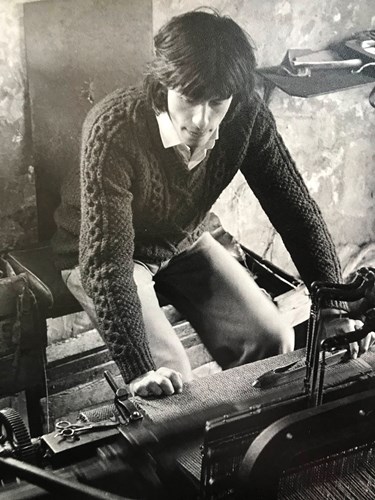 He had not been greatly interested in school except for one “inspirational” primary year when the teacher, Dr Finlay MacLeod,  opened Murdo’s eyes to the creative world and his own potential. Finlay continued to be a great supporter and encourager as Murdo’s career evolved.

When he met the careers adviser at the Nicolson Institute, R.J. 'Barts' MacLeod, Murdo mentioned his interest in photography. Once again, a teacher changed the course of his life, arranging an interview with Napier College in Edinburgh and for the council to pay the air fare – the first time Murdo  had been off the island.

Within two years of graduating, Murdo had an appointment with the picture editor of the Observer, Tony McGrath, who turned up late and was just in  time to be introduced to the young photographer on his way out the door.  McGrath shuffled through Murdo’s portfolio and alighted on a picture of a dog.

The legendary Observer photographer, Jane Bown, was nearby and McGrath called her over.  “The two of them laughed and laughed”.  Murdo departed, never expecting to hear any  more but two weeks later got his  first Observer commission and has been gracing its pages ever since.

In 1985, the Harris Tweed Association and Scottish Arts Council sponsored a photographic competition, to create a portfolio around life in the Western Isles.  Murdo secured the commission from a huge field and the resultant collection includes an outstanding record of the Harris Tweed industry as it then was.

Back in Shawbost, two of Murdo’s brothers, Kenny and Alasdair, continued to weave until a big downturn in the industry persuaded them to seek more secure employment in the early 2000s. Their mother had continued to work as a darner for Shawbost mill until it became impossible.

She recalled: “ Latterly I used to work almost entirely on tweeds where the pattern had gone wrong and re-establish it throughout the length of the piece. I suppose because my hands had to be kept so steady and in an upright position, I started getting pins and needles…

“ The tweed was also becoming more uncertain.  They’d deliver at five in the evening and I’d work on it overnight so that they could they’d collect it at five in the morning and it became too much for me.

“Oh but I enjoyed it! I loved doing it. It was something I could do, and do well. There was great satisfaction in it for myself. I was able to correct even the worst mistakes in the patterns and in the cloth. Thank goodness for it”.

Murdo’s own life experience has given him a lot for which to say “thank  goodness” and which he profoundly hopes will always be there for others in the same circumstances – for a state benefits system that provides support in times of need; for caring teachers; for strength of community; for Harris Tweed. 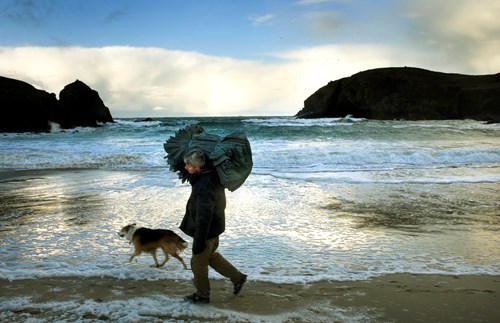 All photographs by courtesy, Murdo MacLeod

*Translated from an interview with Joni Buchanan, recorded in 2006