The relationship with the Institute of the Applied Arts in Vienna is part of our wider campaign to boost sales in Europe’s leading fashion markets including Italy, France and Spain.

Over the next two weeks, Harris Tweed Hebrides will also be involved in major promotional events in Madrid and Paris. The European initiative was boosted when the Italian super-brand Prada included four Harris Tweed “looks” in their main Autumn Winter 2017 collection. (Pictured above)

The Vienna design school draws elite students from all over Europe and is presided over by the highly-regarded British-Cypriot designer Hussein Chalayan while alumni include Andreas Kronthaler, creative director at Vivienne Westwood.

Final year design students will be supplied with fabric from the Shawbost mill to use in their graduate collections and the partnership will culminate in a grand fashion show in June. It is hoped that a long-term relationship will then be maintained.

Harris Tweed Hebrides creative director Mark Hogarth said: ‘When we visited Vienna to explain Harris Tweed to the students, fewer than half of them had previously heard of it, but they were really enthused to learn of its qualities and provenance. That sums up the need for this kind of initiative.

“The students of today will be the creative leaders of tomorrow’s fashion industry. We are proud to invest in such talent and be associated with such a prestigious European institution”. A similar partnership with a Scottish design school will be announced shortly.

Course co-ordinator in Vienna, Claudia Reifberger, said: “We are very appreciative of the collaboration with Harris Tweed because our students now have the opportunity to turn high quality, handmade fabrics in outstanding colours and designs into their personal visions of contemporary fashion”. 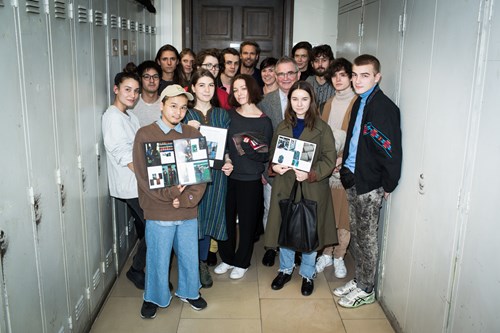 Harris Tweed Hebrides will also participate in a prestigious showcase organised by the British Embassy in Madrid aimed at the Spanish fashion market. Then in Paris, the company is teaming up with The Whisky Shop in the Place de la Madeleine to host a reception during the spring edition of Premier Vision, the main international fashion and textiles event.

Chief executive Ian Angus Mackenzie said: “As far as we are concerned, Brexit means that we need to put even more effort into European markets, to make clear that we place a very high value on future relationships. At a time of global uncertainties, Europe should be more important than ever to us.

“Whatever is happening politically, events like the one in Madrid send out the essential message that trade with EU countries needs to continue as before. Our own initiative in Vienna reinforces that approach”.