SUMMER BLUES AND A NEED FOR TWEED

The end of March saw the Sneachd nan uan bheag (snow of the young lambs). Since then, there has not been a consistent spell where temperatures have settled over 12c – key for kick-starting grass growth. In addition the soil temperature has remained well below the temperature necessary for planting potatoes and other vegetables.

The proliferation of Greylag Geese and their devastating effect on crops and machair are once again in evidence this year. These birds eat seeds. Their dung droppings contaminate grass, making it inedible for sheep and can even cause some lambs to be stillborn. This has led to calls for a major cull. But, even if this occurred, action may be too late to save what is looking like an annus horribilis  for crofters in the islands.

“It has been a really tough time across the islands. This year is looking like a write-off. Crofters who would have had hopes of selling excess hay will now have to buy it in because there is so little grass. Perhaps the only positive aspect of the summer is that there is plenty of tweed to be woven.”

Thankfully Shawbost mill is resistant to the vagaries of the weather and its newly refurbished roof is casting positive summer light into the mill, adding brightness to the working environment and reducing our carbon footprint.  A busy mill bursting with colour and craft provides consolation for the cold dank conditions outside. In addition, a full order book and six weeks to the summer holiday makes for a cheery buzz around Harris Tweed Hebrides. 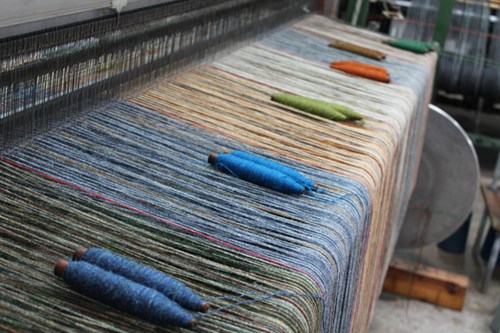 The continued high demand for Harris Tweed also makes for a positive experience for weavers. Ian Mackay  - a crofter/weaver - exemplifies a typical island stoicism when he reflects:  “This year has not been great -  snow at the lambing, peat too wet to cut, geese ruining the grass…. but I have three nice tweeds ready to weave!”

The delicate relationship between crofting and weaving can also work in the other direction, with the tweeds taking a back seat when the weather is right for outdoor work. Over 80 per cent of Harris Tweed weavers are also involved in crofting, the primary form of agriculture to be found in the Outer Hebrides.

A few years ago - before Harris Tweed Hebrides entered the fray – an executive from US trainer giant New Balance was informed that their Harris Tweed order would be delayed for a week. On being asked why, he was told:  “The weather is really good so the hay is being cut and the Guga hunters are heading out tomorrow.’ 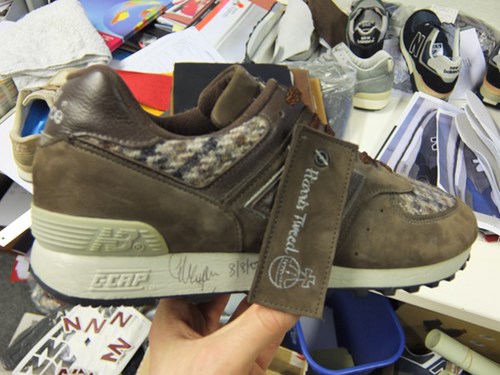 The last is an especially important date in the calendar for the people of Ness at the northern edge of Lewis. Donald S Murray*, the writer of ‘The Guga Hunters’ gave his reason why. “At one time in the Hebrides, particularly in a year when the weather was like this, people depended on the eating of seabirds for their existence. The guga – or the young gannet – was often the bird of choice, particularly in areas like Ness. The annual visit of men from the north of Lewis to Sulasgeir, a rock some distance from the district’s harbour, brought food to the table, the difference sometimes between starvation and sufficiency. It is this sense of continuity with the past that is marked each time Nessmen sail out for their annual quota of gannets, similar in its own way to the tradition of the tweed.”

The executive from New Balance might have been puzzled by the explanation at the time, but in retrospect he could perhaps reflect on how this was all part of the Harris Tweed narrative – a global brand which rests on the efforts (and availability) of 150 weavers working from their own homes and combining their commitment to the loom with other demands dictated by the cycle of the seasons.

That crofter-weaver lifestyle was forged in harder economic times and still contributes to the identity of the industry and the character of the workforce on which it depends.  The wonderfully nuanced relationship between culture and craft should never be broken, even in the face of a lost spring and the persistent appetites of some greedy geese.

*The author's book is now out in paperback from the Scottish publishers, Birlinn.