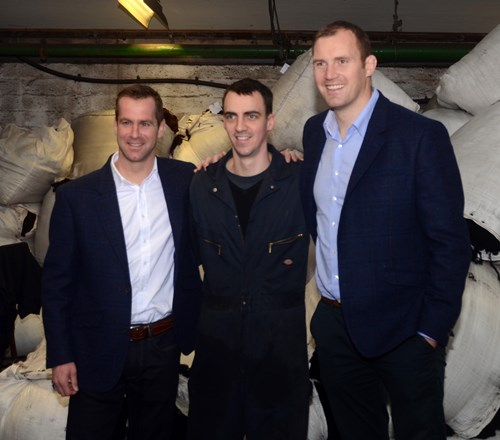 The exclusive Harris Tweed Hebrides’ design was worn during the tour of our mill by Scotland’s cap and points’ record-holder Paterson and fellow former Scotland captain Kellock, both now Scottish Rugby ambassadors. The collection is a three way partnership between Scottish Rugby, Harris Tweed Hebrides and the retailer Walker Slater and is backed by a three year contract which will lead up to the next World Cup in HTH’s no 1 market of Japan.

Scottish Rugby’s Chief Operating Officer Dominic McKay said: “Scottish Rugby is keen to work with iconic, world-renowned Scottish brands and the opportunity to partner with Harris Tweed, which is recognised globally as a quality product, is one that we are very excited about.

“In the global market place in which we operate, it’s important that we can extend the international dimension of Scottish Rugby and generate awareness of our brand.

“Harris Tweed has significant international markets in the likes of The Far East and the United States, which are both key territories for us in broadening our wider supporter base.”

Ken Kennedy, head designer at Harris Tweed Hebrides in Shawbost, Isle of Lewis, has created a bespoke tweed working from a brief to incorporate navy, purple and green, the familiar colours of Scottish Rugby. The resultant check pattern has won the seal of approval from both Paterson and Kellock.

Kellock said: “Harris Tweed is a fabric for all occasions and I believe it’s a real coup to have a design which includes the colours of our international players’ tie as well as our officially registered Scottish Rugby tartan.

“The beauty of this is that it works, whether you’re a traditionalist or after something that’s new and eye-catching.”

The new design will be available in the Walker Slater stores in Edinburgh and London as well as their e-commerce site: www.walkerslater.com

Paul Walker of Walker Slater said: "Working with Harris Tweed Hebrides and the Scottish Rugby Union has been a stimulating creative journey.  The cloth we developed together reflects the National Team perfectly. I have enjoyed developing the clothing and accessories collection immensely, pairing some of our classic designs such as our William Jacket, bakerboy caps, hip flasks and silk lined scarves with this unique tweed. The cloth lends itself perfectly to the Walker Slater signature style and in particular the jackets stand out as boldly as the team."

The definition of Harris Tweed is enshrined in law, with clear legal criteria laid down in the Harris Tweed Act of 1993.

In recent years, Harris Tweed Hebrides has also worked with the Ryder Cup and the Scottish Football Association to produce collections of garments and accessories.

Brian Wilson, chairman of Harris Tweed Hebrides, said: “This is a very natural partnership between two iconic brands which will help Scotland’s discerning rugby followers to wear the colours and support the team in style”.