Representatives from Harris Tweed Hebrides have attended Première Vision — the biggest global trade show for the fashion and textiles industry — every year since the mill reopened for business more than eight years ago.

Held from September 15 to 17 in the vast international Exhibition Centre, this year’s Première Vision was one of the most successful ones yet for the Harris Tweed Hebrides team, headed up by chief executive Ian Angus Mackenzie.

The trade show is not open to the public but is instead attended by those working in the apparel side of the textiles industry, be they be buyers, designers or business owners.

For Harris Tweed Hebrides, whose geographical location on the edge of the Atlantic brings challenges as well as advantages, Première Vision is a fantastic opportunity for networking with customers — new and existing — as well as agents and peers within the industry.

It is where their new collection of fabrics is always launched and when their order year begins. The size of the samples order book to come out of PV is a fair indicator of what kind of year the company will have.

“It was a very successful show. The Harris Tweed Hebrides team are all back at Shawbost and are working hard to fulfil customers’ sample requests which we hope will then lead to orders for the 2016 season."

Première Vision remains the most important trade show for our collection as we continue to see the number of international buyers looking for Harris Tweed increase year on year. The show never fails to inspire and enthuse for the season ahead.”

The show enabled Harris Tweed Hebrides to meet with a lot of existing customers from around the world, particularly Japan, Germany and the UK. They also met a number of new customers particularly from Korea, France and the USA.

Everyone who is anyone attends PV — all the major design houses will have a presence there — but they all ask the same question at the stalls: “what’s new?”

“Presenting variety in cloth designs and colourways is really important for keeping interest in Harris Tweed.

“We have more than 500 designs in our collection. But if you don’t show variety, there’s no freshness and our buyers all come to the trade show to see newness.”

There were fresh colours and new patterns to reflect a modern fabric as well as one with a fine history and heritage. But the bigger collection was also to hand. Staff take samples of every single fabric in the Harris Tweed Hebrides stock range with them to Paris so potential clients can browse them all.

The days of customers writing large orders at trade shows are long gone. But these shows remain critical in terms of receiving orders for the following season and preparing samples after the show is a vital part of that process.

These samples are reviewed in design offices as buyers make their decisions on what fabrics to include in their next winter collection. The main orders typically arrive at the mill between January and March.

Since reopening in 2008, the company have gone from strength to strength and turned around the fortunes of an industry that was in grave decline.

Most recently, Harris Tweed Hebrides were named Scotland’s top SME exporter, but their most prized accolades have come from the trade itself. In 2013, the UK Fashion and Textiles industry named HTH the Textile Business of the Year and Manufacturer of the Year.

HTH chief executive Ian Angus hailed that as “a tremendous validation by our peers” and it was, appropriately enough, under the banner of the UKFT industry that Harris Tweed Hebrides flew the flag for British fabrics on the global stage in Paris. 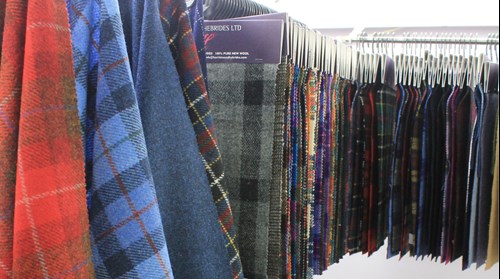