The Uig area of Lewis is the classic example.  By the time Harris Tweed Hebrides was launched, there were no active weavers left in Uig’s villages which had, not so long before, been characterised by the rhythm of the loom and dependence upon a crofting-weaving economy.  The return of weaving to Uig in 2015 was a symbolic event.

There had been weaving in Uig from time immemorial but because of the parish’s remoteness from Stornoway, the history was different to other parts of Lewis. Until well into the 20th century, much of Uig’s communications and supplies were by sea with Harris, or across Loch Roag. The main road to Stornoway was little more than a track.

Uig was not on anyone’s distribution circuit.  As a result, weaving before the Second World War continued to be based on the old wooden looms and spinning wheels with production, mainly by women,  for local use or barter, rather than supplying the commercial Harris Tweed industry based on the Stornoway mills. 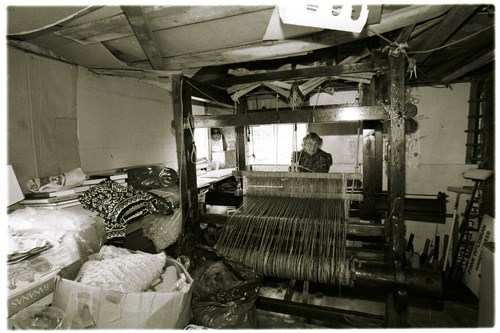 In the late 19th century, amidst demands that land be returned to the people, the particular problems of remoteness – even by Outer Hebridean standards – had been recognized by government.  In 1897, Westminster set up the Congested Districts Board to bring relief to areas afflicted by overcrowding, created by the clearance of other crofting villages.

Funds were specifically made available to encourage spinning and weaving with depots opened by the Scottish Home Industries Association in the furthest flung parts – Obbe in Harris, Uig in Lewis, Lochboisdale in South Uist and Creagorry in Benbecula – to support the very basic industry with improved looms and bigger dyeing pots. In Uig, not much changed over the next 40 years.

Uig remained excluded by remoteness from the growing Harris Tweed industry and by the late 1930s, there was still only one Hattersley loom in the whole area, from Gisla to Breanish. It belonged to Angus MacKay in Carishader – probably, says his son John Murdo, “because he had the money to buy it”.

The family owned a shop, imported goods by sea from Callanish and distributed them by horse and cart.  “I remember hearing about my father seeing one of the early Tilly lamps in Charlie Morrison’s in Stornoway. When he brought it home, the old folk wouldn’t allow it in the house in case it exploded. So it lit up the weaving shed instead”.

At that point, Seonaidh Buchanan takes up the story of the heady days in 1938 when six Hattersley looms arrived on the Bhaltos peninsula of Uig, crated and ready for painstaking assembly.  Though the mills found Uig too remote to serve by lorry, the local merchant and carrier, Calum Buchanan, saw potential for trade which would allow for commercial weaving to be established locally. 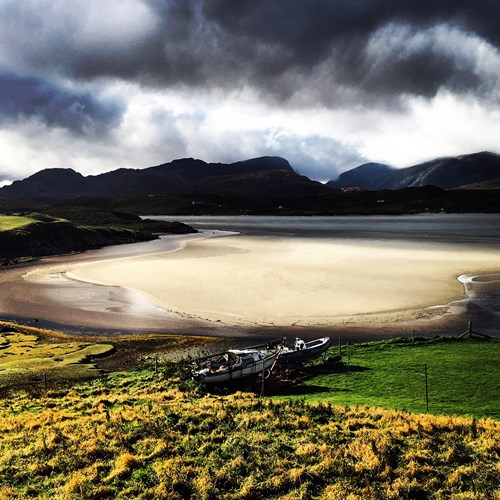 Seonaidh’s father owned one of these inaugural looms. “I started weaving as a boy in the 1940s going to school,” he recalls. “Every one of the families of the weavers could do quite a bit of weaving before they left school. We would be delighted as youngsters to get a spin on the loom”.  Seonaidh’s father was still weaving at the age of 98.

After the war, as communications improved and demand for Harris Tweed increased, weaving became the major ancillary employment in Uig, as in the rest of the island. Seonaidh recalls there being 34 Hattersley looms on the Bhaltos peninsula with at least the same number scattered around the other villages.

When there was work, the earnings were good.  In 1959, a team from Glasgow University carried out a detailed study of the Uig economy, by then suffering from serious depopulation and poor agricultural prices. While a typical croft would yield income of just £195 per annum, Harris Tweed weaving for about 30 hours a week would give an income of £550, “leaving sufficient time to run the croft efficiently”.

The problem was that demand ebbed and flowed.  Seonaidh remembers having 14 tweeds stacked in his loom shed waiting to be woven.  “When I heard wheels on the gravel, I thought ‘not more tweeds’. When another three arrived, I put them in the barn so I didn’t have to look at them”.  In hard times, however, he would go to Stornoway “to beg for a tweed and sometimes I would get one that way”.

Uig’s continuing problem was depopulation. Seonaidh himself joined the Merchant Navy in 1952 and, like many other islanders, saw the world before returning to base. “I sailed with the New Zealand Shipping Company, the Ben Line and Furness Whitty on the New York-Bermuda run, cruising down the West Indies….”. After ten years, he was needed at home to help his father with livestock and the loom replaced life at sea.

As people of working age left in search of mainland employment, there were fewer who could rely on the uncertainties of weaving as their main source of income. One by one, the Hattersleys fell into disuse and none of the double-width looms, introduced in the early 1990s, found their way to Uig. For 25 years, there was no weaving in Uig.

Enter, Seonaidh’s younger son, Calum George. It was only the advent of Harris Tweed Hebrides and the upturn in the industry’s fortunes that made it possible for Calum George to live in Uig and become a “third generation Harris Tweed weaver” while also working with his dad on the croft, raising a family and “keeping the old traditions going, while we’re able to”. 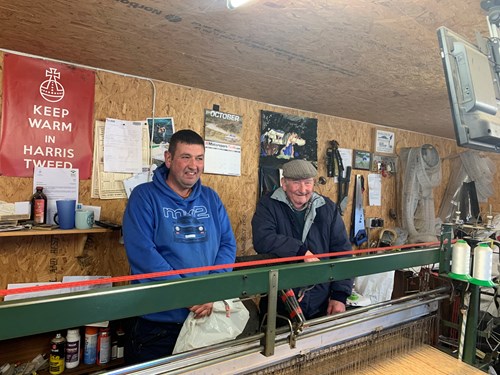 With an idyllic view from the weaving-shed and endless patience in explaining his craft, Calum George has become a “go-to weaver” for countless journalists, photographers and film-crews visiting the island.  And there is a fair chance that they will also receive the benefit of Seonaidh’s considerable wisdom, as he is still busy with “tying-in” duties. 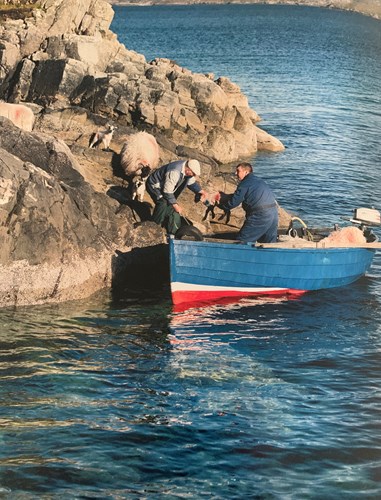 There are currently three Harris Tweed weavers in Uig – a far cry from the old days but still the guarantors of a tradition that remains vital to the area’s culture, history and identity.