For example, the North American Free Trade Agreement covering the US, Canada and Mexico exempts categories of goods which pose no threat to domestic production. They include “apparel made from fabrics in short supply in North America” and the only brand-named fabric is … Harris Tweed.

It is a curiosity that a tiny industry on the edge of Europe should be given a specific name-check built into all such agreements but it did not get there by accident.  Indeed, it is remarkable how much consideration US authorities have given to the status of Harris Tweed over the decades.

This dates back to the time when Harris Tweed was a considerably bigger industry than it now is with North America by far its largest export market. From New York to Vancouver, everyone knew its name and reputation – a level of prestige which inevitably attracted envy.

In the post-war years, the Harris Tweed blazer became an essential item in the wardrobe of every well-dressed, prosperous American.  They certainly included John F. Kennedy who bought all his suits and jackets from Chipp Inc., one of the pioneers of the Ivy Look to which Harris Tweed was integral. 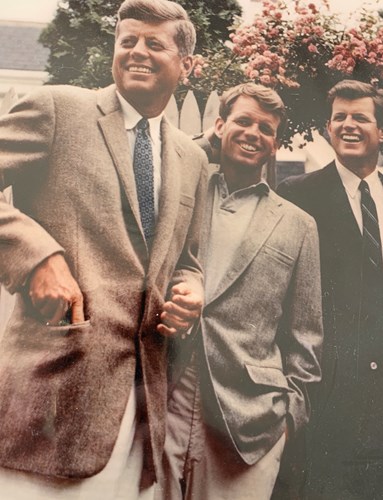 For many decades, Scottish mainland textile producers had coveted a share in the booming Harris Tweed market and only action in the courts maintained its protection as a purely Hebridean craft product.  Immediately after the Second World War this argument spilled into the crucial American market when the US Government brought in the Lanham Act, which governs trade marks.

This opened the door to claims that the name should not apply exclusively to fabric produced in the Outer Hebrides.  The case was closely watched by the US’s own textiles industry and, without doubt, if the US authorities had agreed that non-Hebridean fabric could be sold as Harris Tweed, it would have been the death of the Islands industry.

Fortunately, they rejected that case and Orb-stamped fabric, handwoven at the home of the weaver in the Outer Hebrides of Scotland, was confirmed as the only legitimate Harris Tweed in the United States. On that basis, the industry entered a decade of extraordinary growth.

By the late 1950s, however, the American textiles industry was in sharp decline and the White House was lobbied for protectionist measures. President Eisenhower responded by ordering a higher tariff on imported woolens, causing consternation within the Harris Tweed industry. The proposed tariffs would have made it non-competitive – as, indeed, was the intention.

Enter Rev. Murdoch MacRae, Free Church minister in the Lewis parish of Lochs and a member of the Harris Tweed Association since 1934, closely identified with the weavers’ interests. The Federal Trade Commission was examining the proposed tariff legislation and, in December 1957, Rev. Mr MacRae was dispatched to Washington to plead the case of Harris Tweed, accompanied by Provost A.J. Mackenzie of Stornoway. 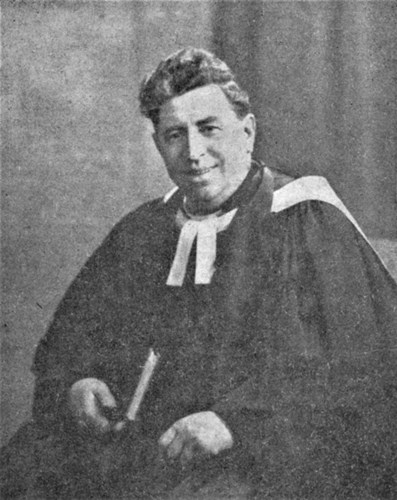 By some accounts, this very political cleric prepared the ground in North Carolina, where he would have had church connections, by gaining a sympathetic hearing from the Burlington Group, America’s biggest textiles company. Burlington were powerful lobbyists and key to gaining concessions from the Eisenhower administration. Rev. Mr MacRae then went to Washington and did his stuff.

He told the FTC that, by its scale, Harris Tweed was “quite incapable of being a danger to American textile manufacturers”.  Though the islands which produced Harris Tweed might seem small and remote “they had raised a hardy, courageous and loyal race of men and women” who had “given a good account of themselves in peace and war”.

During the Second World War, he continued, thousands of (American) lives had been saved by rescue planes based there. Rev Mr MacRae told his audience that he did not want “to see again the people of these islands being scattered to the ends of the earth, but that was what would happen if their industry failed”.

It was a tour de force which earned its due reward. There were also direct submissions to Eisenhower who had maintained his own Scottish connections forged in time of war. For whatever reason, Harris Tweed got most of what it was asking for and further boom years  followed. It was,as the Stornoway Gazette reported, a “Triumph for Rev. M. MacRae”. 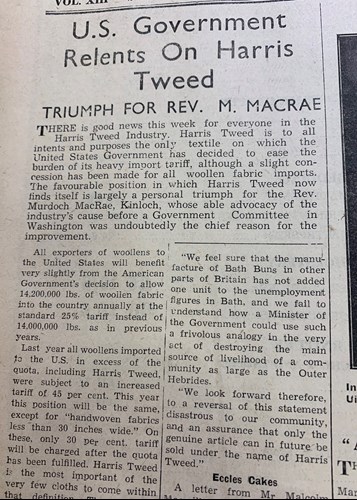 The North American market would later decline for other reasons, principally the shift to lighter, synthetic fabrics as air conditioning became a staple in every home and office. The next time the industry had to worry about the American trade authorities was in the 1990s when there were questions about whether the transition from single-width to double-width looms would endanger its special treatment.

By this time, however, the American garment-making industry was in precipitous decline with production flooding offshore to countries like China and Mexico. Importation of fabrics to the US was therefore no longer a matter of concern and Ian Angus Mackenzie, then chief executive of the Harris Tweed Authority, recalls that what was at first seen as “a huge issue very quickly became a non-issue”.

Harris Tweed continued to receive favourable treatment for imports into the US  – but now it was for “apparel” made from the fabric, as well as for the fabric itself.  And still, the name lives on in US trade agreements.

In another universe, of course, Harris Tweed’s closest relationship with the White House might have been through the current President, Domhnall Iain (Donald John) Trump whose mother was an economic migrant from Lewis in the 1930s and her home village of Tong was a bastion of Harris Tweed weaving.

Trump has never shown much interest in his Lewis connections and this has been entirely reciprocated. When he made his state visit in 2019, the Queen pointed out a bolt of Harris Tweed which had been strategically positioned in Buckingham Palace. That is as close as he has ever been to the industry that sustained his mother's generation.