The Korean economic miracle took the country from poverty in the 1950s to the world’s eleventh largest economy today. Along the way, Korea rejected the cheap goods, low labour costs option followed by some countries in the region.

Instead, it focused on education, high tech and heavy industry led by the chaebols like Samsung and Hyundai, producing everything from ships to consumer goods. A growing middle class looked worldwide for products to import.

Enter the usual suspects -  French couture, Italian leatherwear, American fast food, Scotch whisky and, of course, Harris Tweed which started to find a market in Korea from the mid-1980s.

Since then, the country has undergone a youth-led fashion revolution. Alongside K-pop and K-film, Korean fashion designers began to win international recognition.  The chaebol system encouraged young designers to create the best clothes from the best cloths and this created space for Harris Tweed to blossom. 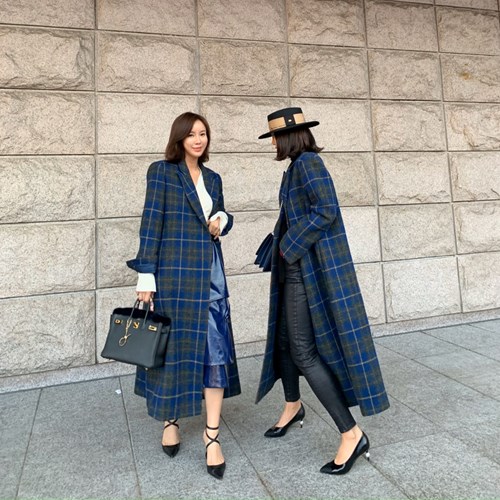 There is a unique design-led sense of style in Korea, which has worked well for Harris Tweed. Fashion brands love the patterns, cut and drape of the fabric and regularly incorporate it into garments and accessories that use traditional Korean cotton and other hardwearing natural fibres.

Driven by a thirst for product information, Korea’s detail-obsessed millenials and Gen Z consumers have the ability and interest to learn and love the story of Harris Tweed, its provenance and unique characteristics.

Our man in Korea is Mik Chung.  After graduating in fashion design, Mik entered the textile industry. “One of the companies I worked for imported Harris Tweed and my ex-president Jerry Lee worked with Rae Mackenzie. That was my introduction to the world of Harris Tweed”. 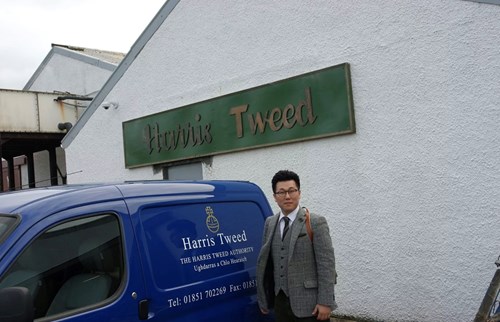 At that time, Rae was sales director of Mackenzie’s mill in Stornoway and recalls Korea as a “small but growing market” which had been importing Harris Tweed since the mid-1980s. When Rae came out of retirement to fill the same role in the early days of Harris Tweed Hebrides, Mik Chung was one of the agents recruited.

It would be fair to say Mik was a lot younger than most textile agents and saw the opportunity to shape his own market.   He and his young team have managed to lever Harris Tweed into the K-pop and Influencer spheres where young, stylish bloggers command huge on-line audiences and influence.

Mik recalls: “I visited Lewis for the first time in 2011.  I remember listening to Mendelssohn's Scottish music on the plane. The island was in line with the feelings I had received from the music - very different from where I live but it felt like my hometown.

“Korean fashion is a mixture of classic and street culture. Now, online influence in Korea has grown very much so the activities of the influencers are important. A few influencers made and sold Harris Tweed products which had a huge impact”.

In 2012, Harris Tweed Hebrides targeted Korea as a growth market and took part in a luxury goods event at the British Embassy in Seoul. As it happened, two very famous Korean footballers – Ki Sung-Yueng and Cha Du-Ri – were playing for Celtic at that time and were enlisted to the cause. 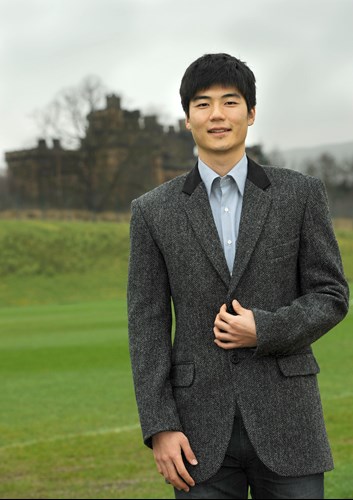 Their images attracted huge interest at the event even if they are not quite in the K-pop league. Mik says: “Korean footballers still lack influence in fashion compared to other countries.  But Ki and Cha are very famous footballers and as a football lover, I was very happy!”.  (Ki has just returned to Korea to play for Seoul).

UK Fashion and Textile international business director, Paul Alger, watched the rise of Harris Tweed on his regular visits to Seoul. He commends the chaebol-owned department stores like Lotte and Shinsegae for encouraging young fashion designers and being open to quality international fabrics.

Paul says: “The international profile of Harris Tweed in the luxury industry, as well as its heritage and quality, caught the interest of Korean  designers and consumers. It is now established at the heart of Korea’s progressive urban consumer market.” 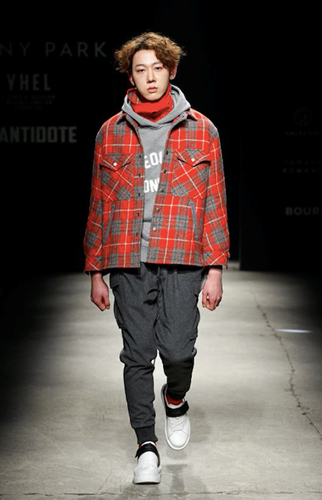 Mik Chung adds: “We strive for the values of Harris Tweed and have a strong sense of pride in our work. Values do not change so we think there is a bright future for Harris Tweed in Korea”.  That sounds like Seoul music to our ears!