The tweed look features prominently in just about every image from the vintage days of golf. Not surprisingly, when the game came to the Outer Hebrides in the last decade of the 19th century, Harris Tweed was the uniform of choice.

In 1890, a course was created near Stornoway on land now occupied by the airport. The following year, South Uist received a distinguished visitor, 'Old' Tom Morris - four times Open champion and fabled designer of courses - who had been retained by the estate's owner, Lady Gordon Cathcart, to carve 18 holes from the machair at Askernish.

More than a century later, the course - having undergone many tribulations along the way - was rediscovered as the 'lost Old Tom course' and now attracts visitors from all over the world, to play 'natural golf' in a stunning setting. 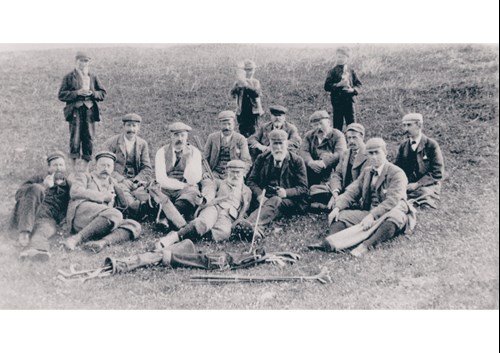 Right up until the 1930s, the Harris Tweed look persisted in golf. Even if the jackets had been discarded, there were still plus fours, waistcoats and caps aplenty.   That history is reflected in pictures adorning the walls of Gleneagles Hotel which was destined to become the reunion point for the natural link between golf and Harris Tweed.

The post-war era saw cotton and specialist fabrics coming into golfing attire. Tweeds had vanished as functional wear but a good Norfolk jacket or sport coat could still be seen in clubhouses all over the world.   This was a highly desirable market but how could we revive the relationship between golf and Harris Tweed?

That opportunity arose when Gleneagles was selected as venue for the 2014 Ryder Cup .  It was not easy to engage with the myriad commercial arms of one of the world’s largest sporting festivals.  However, creative director Mark Hogarth tracked down an old school friend, Scott Mitchell,  now one of the leading greenkeepers on the European Tour. Scott knew a man - who knew a man - and Harris Tweed Hebrides was inside the Ryder Cup's perimeter fence.

Luxury Italian brand Canali held the contract for the team uniform and would not move from their superfine cashmere,  despite warnings that a late September evening in the Perthshire hills offers a rather different climate to Tuscany.  Harris Tweed Hebrides did however secure an agreement to produce an official Ryder Cup collection.

Ken Kennedy – then head of design at Shawbost -  worked closely with Ryder Cup officials on a remit to fit their livery and brand colours. He made 30 herringbones and houndstooth options and no 24 was picked!  In early 2013,  swatch number RC24 - a stunning herringbone using a ‘new blue’ yarn -  became the official Ryder Cup Harris Tweed. 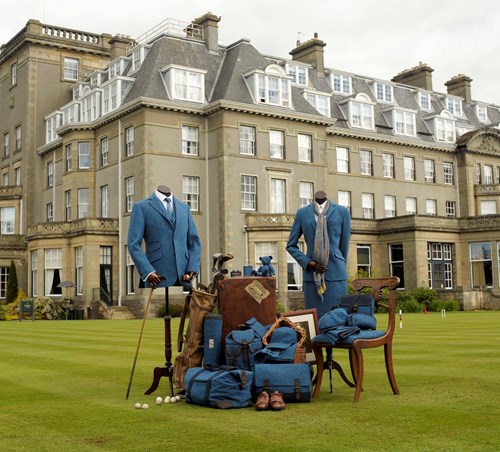 Walker Slater, the respected Scottish retailer, became our design partners and their team produced an 18 piece collection that included jackets, bags, caps and even plus fours Old Tom would have approved of.  The media launch proved a big hit and the collection went on sale six weeks ahead of the competition with sales so strong that it had to be withdrawn to retain stock for the merchandise village at Gleneagles.

Stephen Gallacher, the only Scottish golfer in the European team which retained the Ryder Cup, became a big supporter of the collection and continues to sport his Ryder Cup Harris Tweed jacket with pride. It is, says Stephen, "fabulous to wear and constantly admired". 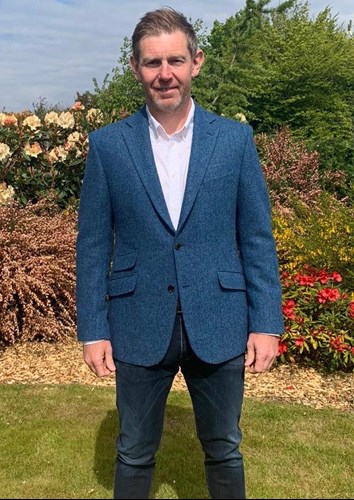 Harris Tweed had further updated its image by connecting heritage with modern design. Six years on, Walker Slater continues to sell the collection and many clients from across Europe, the USA and even Japan refer to the Ryder Cup collection as a catalyst for their interest in Harris Tweed.

It's not quite the Ryder Cup, but Harris Golf Club - with its marvellous nine hole course at Scarista -  tips a wink to the US Masters by awarding a Green Jacket to the winner of each year's Harris Open. It is made, of course, from Harris Tweed, woven at Luskentyre by Donald John Mackay.

Meanwhile, Harris Tweed golf accessories remain very much in vogue and the Shawbost mill supplies  fabric to several clients including Mairead Hume Golf whose products are particularly popular with women golfers and endorsed by several leading lights of the professional circuit.

The colours are brighter and accessories more varied but it all helps to maintain a connection that links Harris Tweed, the Hebrides and golf, stretching back to the days of 'Old' Tom Morris and his fellow pioneers.